There are a few requests now for more comprehensive statistics display:

I’m thinking it could be nice to have a seperate section in sidenav menu for Statistics that would be hidden behind the “Show more” section, and in there we could have different types of statistics reports available (some for feedback, some for history, and the possibility for others too), each of them might also have various filters, plus the ability to export the data to CSV.

I think it might make sense to start with the suggestion from 3, as it’s quite specific already, but just keeping in mind that there would be some very different types of data required for other reports.

I have left a supporting comment on the 1st thread, and I like the idea of having the total amount of pickups and of food saved available somewhere as I imagine that this motivates the group.

We discussed this a bit today in our karrot co-working session, and a few thoughts came up:

So, I was thinking to extend the concept from @mzpawlowski by adding a “food saved” column to the table (see How do you handle late drop-outs from pickups? - #11 by mzpawlowski), whaddya think?

I agree that this kind of information should foster neither competition nor pressure. We should also keep in mind that the amounts of food saved often depend on own guesses, so I now think it is better to look at it in a more aggregated form only.

I made some progress! 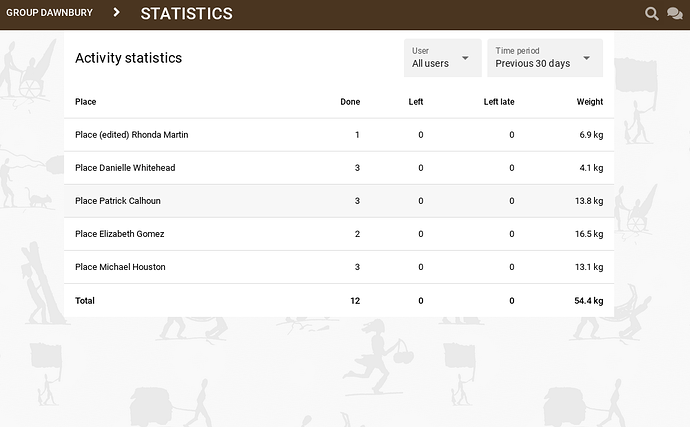 Sorry, that’s a lot of points, any thoughts on any of them would be welcome! I’ll probably leave it for a couple of days now…

I’d round the kg number at least to full integers, maybe even more coarse. Otherwise it looks too precise

I wanted to say thanks for the current statistics! And say that we want more :-).

Could we have the number of missed pickups? So that we could see which shops are the most problematic and see the numbers? |

Yes, seems a good idea! This would only make sense when selecting “All users” though, as there is no concept of an individual person missing a pickup.

By the way, what exactly does the “left” stand for now? I got lost. The initial idea was that it stands for resigning from a pickup but now it’s resigning minus the ones that other person saved? I’m a bit confused. Maybe a name change would help?

I agree, it’s confusing! It definitely needs a clearer explanation. Your guess is correct, it’s ones where the user left, that did not eventually get fulfilled - the thinking was that if somebody “hands over” the pickup to someone else, that is quite different to just leaving…

Two improvements could be:

As said in other place, it would be great to have statistics for feedbacks given so that we could compare the nr of pickups and the nr of feedbacks and see where and who did not provide feedback.

Yes, also seems a good idea. As the feedback can be given at a later time that could make it confusing (for example, if viewing “past 7 days” there might be a feedback given in the past 7 days for a pickup 8 days ago). So I think it should only consider the date of the pickup, rather than the feedback. Maybe that is a detail you would rather not think about!

The other aspect is for pickups (or, activities I should call them) that multiple people do - for some groups it’s fine when just one person does the feedback, but maybe other groups require everyone to give feedback? How is it for your group?

And one more idea I had, at the moment the statistics shows one row per place, I wonder if it’s useful to have a “person” view as well, which would show one row per person? (which would deal with the issue of having to look at each person individually…). Does that seem useful? Does this make it too easy to “pick on” someone?

I started work on this now

Just the backend bit for now… the frontend part soon…

Closes https://github.com/yunity/karrot-frontend/issues/2336 (well, most of it I… think). Also see https://community.foodsaving.world/t/more-statistics-display/489/8. This adds: - **missed activities** - only relevant if there is no user filter, as a single user can't miss an activity by definition - **feedback count** - in addition to feedback weight that it already returned - refined the **left** / **left late** concept, so now: - **left** = activities left at any time, which were maybe later fulfilled, or not - **left late** = same as above, but left within 24 hours of start - **left missed** (_new!_) = activities left at any time, and later were missed (nobody did them) - **left late missed** (_new!_) = same as above, but left within 24 hours of start - filter by **activity type** Before this PR, both the **left** and **left late** would check that the activities were later _not full_ (rather than missed entirely). I wasn't sure at the time which was better. With the new way the frontend can calculate the "missed but later fulfilled" value too if needed (`left - left missed`). I also fixed a bug that I _think_ was double counting stats for activities with multiple feedbacks... I added `distinct` to all the `Count()` calls to resolve that.

Ok, I had a go at the frontend - specifically trying to get this “left” bit clearer, here’s what I have so far…

There is one left column, and it shows the count for how many activities were left (somebody who was signed up for an activity but then stepped back): 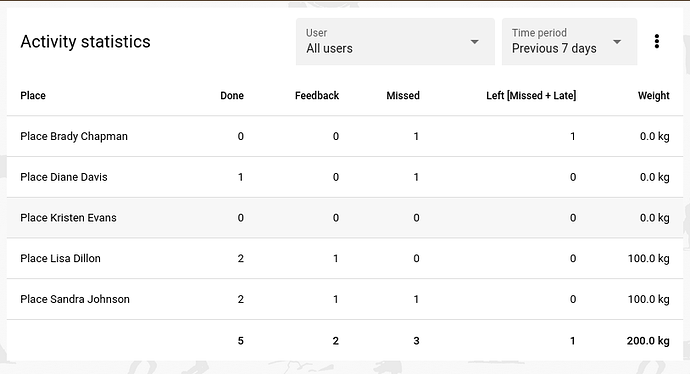 (You can also see the new feedback and missed columns - the missed column will only show up when All users is selected - as an individual user can’t miss an activity).

The left column has two options behind a little “3 dots” menu:

I put it as options, rather than multiple columns as the table would be really overwhelming with all the different combinations visible! I would think to have the default as missed = true and late = false.

So, questions for anybody:

left - no, for me it’s not clear, still
yes, more explanation would be good, but actually only for the “left” column
whether it’s worth - sure, it is! And I think the defaults that you suggest are good

The wording is actually the hardest bit here for me!

OK! The challenge will be to translate it now to Polish ;-).

It makes sense to me!

Hello,
Is it possibile to add to statistic information if in some point there were no activity because of that noone sing in?

Ok, some time later, the feature finally got deployed! (it had been waiting only deployed to dev site for a while…). Let me know how it goes!

@Michal_Lewandowski it might be that this release answers your request, as it now has a missed column, that shows how many activities were missed for a given place in that time period. Is that what you are wanting?

(it took a long time to reply, as I’ve had a karrot-break for the last couple of months, cycling from Germany to UK